It took eight years, but this summer I finally led a wildlife holiday on my home patch. It wasn’t the trip I had planned for 2020, to introduce Wildlife Travellers to the delightful Sussex spring. Instead, this was a thoroughly exclusive trip with only one traveller, who just so happened to be an old schoolfriend. You could call it a holiday.

Passport forgotten, I loaded up nets, books, bat detectors and moth trap and headed the 30 or so miles to Hooe Level Salt Marsh Farm. I had met the owners Pete and Claire virtually (a theme for 2020) earlier in the summer, whilst I was running a course on rewilding. The farm nestles on the edge of Pevensey Levels, a wetland of international importance; its grazing meadows criss-crossed by ditches crammed full of interesting wetland plants and invertebrates, with particularly rich communities of water beetles, snails and dragonflies.

The Farm is home to a small camp where we were to spend the next couple of days relishing in our release from the confinement of the spring. Burning Heart River Camp sits alongside Wallers Haven, a leisurely stretch of water that wriggles south towards the sea, Rudd silently skimming its surface. In late July, the frenetic pace of the bird nesting season is calming but the dense reeds were still well occupied. A Cetti’s Warbler shouted exuberantly and often by the river, his declarations interspersed with the yelps from a trio of Marsh Harriers keeping watch over the marsh. Young birds were much in evidence by now: family groups of Reed Warblers shuffled around, keeping in touch with short, croaky calls, and one evening a gang of teenage Starlings descended, the flock rolling from bush to bush as they searched for the perfect roost.

Gatekeeper butterflies weaved around the hedgerows, and tufts of Wild Teasel were avidly probed by foraging Common Carder Bees and White-tailed Bumblebees. In the outdoor kitchen, leafcutter bees had found their own microhabitat amongst the woodwork. A busy female, the pollen brush under her abdomen brimming with pollen, provisioning her nest, spurred us on as we made lunch. The first moth of the day, Chinese Character; a proficient bird dropping mimic, almost had us convinced that a chattering group of Swallows passing over had left a gift.

As the daylight began to drop and the last Brown Hawker had retired to the cover of the reeds, the night-time inhabitants of the marsh began to stir. The levels prowled by Barn Owls, were also patrolled by large Noctule Bats, and in the fading light we watched them swooping over the cattle-grazed grassland. As darkness descended further, large crowds of Common and Soprano Pipistrelles gathered to hawk for insects along the water’s edge. The light from the moth trap lured in a colourful catch including Gold Spot, Rosy Rustic and Elephant Hawkmoth.

Claire and Pete are working to enhance their corner of Sussex for wildlife, and a couple of nights exploring their camp, a real shared space with nature, was a very welcome relief. Hopefully you also managed to enjoy the nature closer to home. 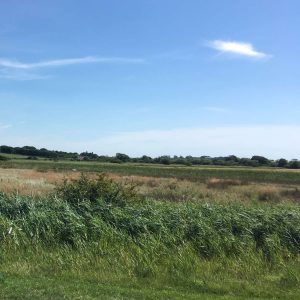 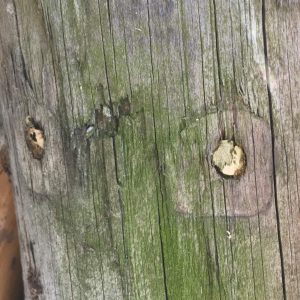 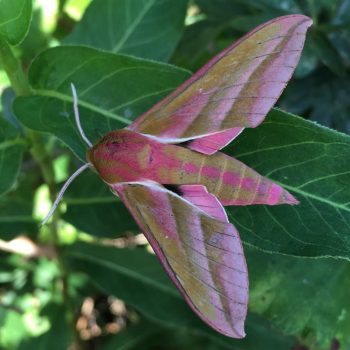